Haydar Aliyev Culture Center in Baku, capital city of Azerbaijan, attracts attention as a building which puts a signature to Azerbaijan history at the coast of Caspian Sea with its concert and conference hall, art galleries, library, media center, museum, common use areas, closed car park area, artificial pond and cafeteria. A significant difference has been created too  in the architectural design of the Center with the lighting solution which Helvar has completed with its energy efficient lighting control system.

Haydar Aliyev Culture Center in Baku designed by the worldwide famous English architect Zaha Hadid of Iraq origin who avoids the use of angled arrangements and  is recognized with a fluent and round shaped style is established on 57.507 square meters area. All language, cultural and historical values feature building stones in the design of the center which hosts many culture and art events such as exhibitions, conferences, concerts, forums etc.

Rob Honeywell, Managing Director of Maurice Brill Lighting Design (MBLD) which is a London lighting consultancy company, says “We had to establish a link between light and architecture and produce a solution to the complex three dimensional geometric forms which were present in the interiors and exteriors and which covered large spaces. We tried to lay emphasis on the sculptrality evoked by the basic architectural design to be able to capture a fluent discourse at the points where the limits of light and architecture became blurred and a lot natural result emerged.”

MBLD designed a lighting solution for Haydar Aliyev Culture Center which Helvar completed with energy efficient lighting control system. A simple programming system was intended for the events to be realized at the interiors and exteriors of the center and while the user experience was developed by means of this programming, also it was possible to check and monitor the productivity of the lighting systems.

According to Aniket Gore, lighting designer of the project and also a partner of MBDL, "Lighting responds to the needs of the continuously changing 3 dimensional geometry and expresses the sculpture-like features of the building. Innovative lighting details integrated to the texture of the building non-egregiously slightly touches and passes the surface of the monumental lobby which interconnects all principal event locations and models the texture of this surface and provides indirect lighting."

It was needed to use a lighting system in the auditorium which shall operate without flickering and in a rather low light level. Helvar found  a solution to this problem of potential flickering risk which energy efficient LED lamps may cause when they are used in low lighting level by updating the driver software and using its own lighting control equipment. By means of this solution, a lighting which can operate without flickering in low lighting level could be provided for the stage of the auditorium and this intervention became a successful solution. 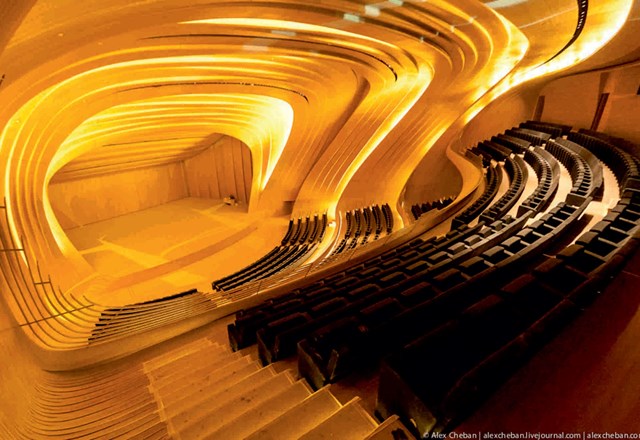 As Aniket Gore says, "Lighting design of Haydar Aliyev Culture Center was an exciting, challenging and informative journey which covered some 3 dimensional lighting researches which required the examination of miscellaneous dummies prepared for the purpose of reaching to the lighting effect which we had imagined and realization of a series of lighting trials at the site."

Şafak Koç from Elekon, System Partner of Helvar, says "We were much happy to engage in this unique project and innovative lighting design realized in Haydar Aliyev Culture Center."

Haydar Aliyev Culture Center is deemed worthy of international awards for its unique architecture, as well as, its extraordinary lighting design.